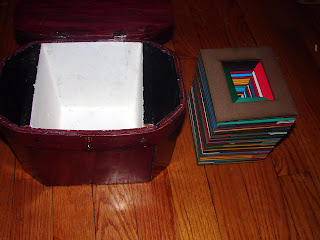 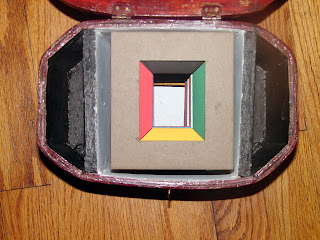 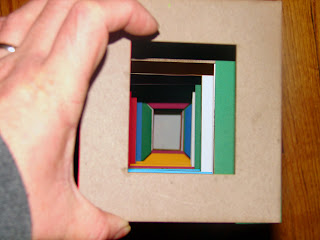 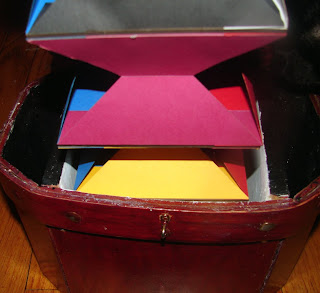 Clutch Gallery is pleased to present Translations by Tom Burtonwood. Translations explores color and plays with sequence. The piece is a color-blocked laser-cut accordion- folded paper work. At rest, it takes up the volume of Clutch; when expanded to its full length, it extends Clutch’s space 8 feet up. Each fold of the accordion is created from a series of negative spaces and colored planes that are revealed when the work is expanded. With each viewer, the work takes on a new shape depending on the amount of expansion the viewer gives the piece. This work is meant to be seen in many contexts and locations so that viewing is a different translation of the context and literally a translation of the planes in space. Translations runs through January 16, 2011.

Tom Burtonwood was born in Manchester, UK, in 1974. He worked as a studio assistant with noted English landscape painter David Blackburn from 1993 to 1997. He received a BA Hons. in Fine Art from Loughborough University in 1997 and an MFA from Southern Illinois University in 2001. Between 2003 and 2009 he worked for Bridge, an arts and culture nonprofit based in Chicago, first as managing editor for their magazine and later as operations director of their successful international art exposition, producing shows in Miami, New York, London, and Berlin. Recent exhibitions include Gillock Gallery, Paris; NOISEfestival, Manchester; The Center for Book and Paper Arts, Columbia College, Chicago; Version Fest 2010, Chicago; Fountain, Brooklyn; and ThreeWalls, Chicago. Burtonwood teaches at Columbia College Chicago and the School of the Art Institute of Chicago.