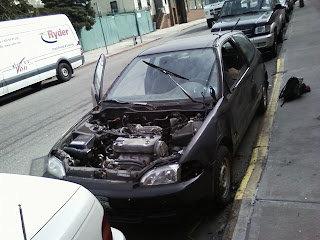 Last week Sue Havens went to meet the police where they found her missing car, gutted. The box that carried Fine Lines which was to be exhibited in Clutch was on the seat, OPENED, with the piece GONE. The note to Meg Duguid was still there. Apparently the car had been sitting there for two months.
Clutch Gallery Fine Lines Hot Dots stolen car Sue Havens