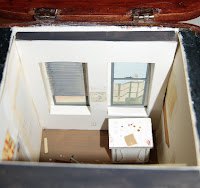 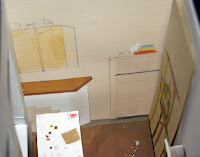 Clutch Gallery is pleased to present Boîte-en-valise by Jason Dunda. Boîte-en-valise ('box in a suitcase') is Dunda’s humble reimagining of Marcel Duchamp's portable miniature monograph of the same name. For this work, Dunda has installed a painted version of his Bridgeport living-room-slash-studio that he has occupied for the last eleven years. Among the objects in the room are Dunda’s handmade wheelbarrow, reproductions of drawings kept inside his desk, and his fridge with neatly piled plates on top. In keeping with his other works, Boîte-en-valise is created with an economical graphic stroke with a narrow but sophisticated color palette. Boîte-en-valise runs through December 7, 2011.
Jason Dunda was born and raised in Toronto and moved to Chicago in 1999. He trained as an oil painter at York University in Toronto and the School of the Art Institute of Chicago. He has exhibited both nationally and internationally at Katharine Mulherin Contemporary Art Projects in Toronto; Dean Project in New York; Fluxspace in Philadelphia; Slow, Green Lantern, Kasia Kay, and the Hyde Park Art Center in Chicago; the Contemporary Arts Museum in Houston; the Wexner Center in Columbus; and the Heine-Onstad Art Centre in Oslo. He is currently an adjunct assistant professor at SAIC and is represented in Toronto by Katharine Mulherin Contemporary Art Projects and in New York by Mulherin + Pollard.
Jason Dunda’s curatorial endeavors border on parody. From 2000 to 2004, Dunda ran Modest Contemporary Art Projects, a negligible 36-square-foot gallery space. Given Clutch’s small footprint, Dunda seemed like a natural match to the space. He is also one-half of the Alliance of Pentaphilic Curators, who in 2006 insinuated a 125-person group project upon the University of Illinois at Chicago’s Gallery 400. In 2011, they concocted Five Funerals, a series of artist-run memorial services, in an attempt to put a handful of cultural ideas to rest.