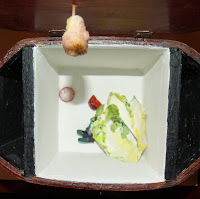 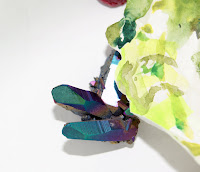 Clutch Gallery is pleased to present Greenswoggle by Paul Melvin Hopkin. Creating a story with modest production values, Greenswoggle articulates contradictions though a minimal whisper. Salad bears the hallmarks of healthy and wholesome, but on many a menu the salad will have the highest fat content, the most processed ingredients, and the highest content of sodium based preservatives, emulsifiers, deflocculants, washes and flavor additives, not to mention the added sugars. Americans are familiar with the melting pot metaphor, but a salad remains more apt. The ingredients maintain discrete identity but the mix manages to be more than the parts. As interested in undoing wholesome as getting anyone to question menu item choices, Paul Hopkin intends the unpacking process to feel like an idiosyncratic carnival game more than a homework assignment. Greenswoggle runs through January 25, 2012.

Growing up in the Nevada desert, Paul Melvin Hopkin was raised to be a scientist; he was also raised in a profoundly religious home. He started his education as a chemistry major and began his art education at Brigham Young University in Utah. He received an MFA from the School of the Art Institute of Chicago in 1997 and continues working with non-traditional sculpture. He has taught video and performance as well as foundation level courses and exhibits his work mostly in unassuming apartment gallery venues in Chicago. Two and a half years ago he opened slow in order to develop an audible curatorial voice.

Clutch Gallery is a 25-square-inch space located in the heart of Meg Duguid's purse, which is currently being carried by Emma Robbins. The gallery is dedicated to exhibiting contemporary art of all media. Clutch opened in December 2009 and was initially intended to maintain regular programming through December 2010. In December of 2011, Meg Duguid decided that she no longer wanted to carry Clutch, so her favorite accessory is being used by other curators. Clutch will continue to run as a curatorial project until the gallery wears out from daily use. To view this exhibition and find out where Clutch is going, follow it on Facebook, or you can make an appointment for a personal viewing time.

Emma Robbins is a photographer and fibers artist currently living in Chicago and studying at the School of the Art Institute of Chicago. Presently, she is making small scale, public installations and working on a photography book about her grandparents. When not working on these things, she “TAs” a photo class for high school students, works at the SAIC’s photo department, and sells cupcakes and coffee at a small bakery. Utilizing Clutch’s outside appearance and portability, she will bring the gallery into public spaces, where the work will go beyond the gallery walls, and intervene these spaces. Emma plans to work with Clutch’s unique characteristics that make it well suited to show work that can't really be shown in traditional exhibition spaces
Clutch Gallery Emma Robbins Paul Hopkin Salad