A year of reorganization, exploration--Clutch in the Trib 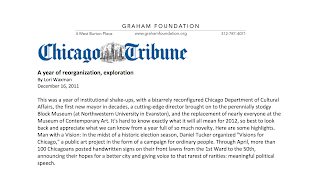 A year of reorganization, exploration

December 16, 2011|By Lori Waxman, Special to the Tribune
This was a year of institutional shake-ups, with a bizarrely reconfigured Chicago Department of Cultural Affairs, the first new mayor in decades, a cutting-edge director brought on to the perennially stodgy Block Museum (at Northwestern University in Evanston), and the replacement of nearly everyone at the Museum of Contemporary Art. It's hard to know exactly what it will all mean for 2012, so best to look back and appreciate what we can know from a year full of so much novelty. Here are some highlights.
Man with a Vision: In the midst of a historic election season, Daniel Tucker organized "Visions for Chicago," a public art project in the form of a campaign for ordinary people. Through April, more than 100 Chicagoans posted handwritten signs on their front lawns from the 1st Ward to the 50th, announcing their hopes for a better city and giving voice to that rarest of rarities: meaningful political speech.

If sending artists to art fairs is like sending cattle to slaughter, the new MDW Fair is a gorgeous green pasture. With a first installment in April and another in October, the low-budget, feel good exposition at the GeoLofts in Bridgeport highlighted small local art spaces like What It Is and The Storefront, hosted DIY presses and displayed the work of curatorial collectives. Founded by the Public Media Institute, Roots & Culture and ThreeWalls, all perennial doers in the city's scrappy, expansive cultural scene.
The craftiest work at Art Chicago in April was not to be found in an exhibitor booth, or even at NEXT, its cooler, hipper sister fair. Adventurous visitors sneaked up to the 17th floor of the Merchandise Mart and haunted the empty hallways until they arrived at the Converso Modern showroom, where New Capital Projects collaborated with balloon to install punchy sculptures by emerging local artists like Carson Fisk-Vittori, Andy Hall and Andres Laracuente amid vintage Knoll sofas and Saarinen coffee tables.
The Most Auspicious New Start Award goes to the Chicago Artists' Coalition. The organization was founded in 1974, and hasn't been relevant for years. But under the directorship of Carolina Jayaram, the organization moved into its new West Loop quarters in May, complete with 2,500 square feet of gallery space and nine studios for the very promising inaugural artists of the BOLT residency program.
"Evidence of the Material World," at Devening Projects + Editions in October, was Dianna Frid's exhibition of sculptures, collage and artist books. Characteristically lush yet spare, it gave tactile, anomalous form to the ephemeral phenomena of love and being, light and space. Frid brings the planets home but keeps them strange; she puts death in the palm of your hand, lightly.
The award for Best New Chicago Monument absolutely does not go to the giant Marilyn Monroe on Michigan Avenue. Thank you, Tony Tasset for providing the perfect rejoinder to the most embarrassing public display of sculpture since Cows on Parade.
At least Hot Dog Man, the artist's exuberantly grotesque, 8-foot-tall fiberglass Chicago-style wiener engenders meaningful embarrassment, as well as a back story. This Dog wears a ring, and has been on display since November at Kavi Gupta Gallery.
Plenty of promising galleries opened in challenging spots this year, including Comfort Station, an abandoned, turn-of-the century resting place for tired travelers in Logan Square, now a multidisciplinary arts space; Terrain, a takeover of Sabina Ott's Oak Park front lawn; and SHoP, a kunstverein/nonsports pub/wood shop/radio station collaboratively run out of an 1890s mansion in Hyde Park.
The smallest and most portable by far, however, must be Meg Duguid's Clutch Gallery, housed in her boxy vintage purse, and currently featuring an installation by Jason Dunda.
ctc-arts@tribune.com
Twitter @chitribent