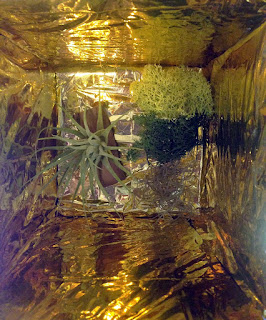 Clutch Gallery is pleased to present Untitled (aerophyte) by Erin Washington. Erin transforms the interior of   Clutch into a glowing environment filled with tillandsias, also known as aerophytes or air plants.  The gallery walls are covered with metallic gold Mylar, a material long associated with the space age and DIY survival tactics. Four different aerophytes are nestled in this luminous environment. The figurative symbiosis between “space blankets” and air plants manifests Erin’s ongoing preoccupation with temporality, flux, and ephemera.

Erin has adopted Mylar into her lexicon of materials as a phenomenological symbol for the sublime. In an earlier project, Don't Breathe Too Much, she lined an entire room with Mylar, forcing its residents to “live on gold” for a month. In this installation the tillandsias, which literally live on air, are extended the same golden nourishment, foregrounding their meaning as stand ins for vibrant, evolving artworks struggling to flourish—even survive—within the institutional discourse.

With a nod to Walter de Maria’s New York Earth Room—a room filled with 280,00 pounds of soil that must be watered and raked daily since 1977—Untitled (aerophyte) raises questions about the viability of ephemeral works of art. How can they be sustained and nurtured in their transplanted state, so alienated from their genesis? In the not too distant future, will astronauts farm in the void?

Erin Washington embraces materiality and labor to examine themes of vulnerability and permanence. Questioning how time structures transitions in ephemera, she creates mixed media paintings, drawings, and sculptures, which unravel time through the performance of their making, and their subsequent degradation. Erin employs fugitive and symbolic materials such as chalk, blackberries, lemon juice, fire, ashes, moss, sugar, bone and saliva. Colors fade or pigments are burned: and the resulting objects emulate the cycles they describe. Her actions and products are in a constant state of flux, highlighting the disharmony between meaning, beauty, and a fundamentally messy universe. However, the temporality of the work’s making counters ambivalence; the immediate process and presentness  the work demands eclipses uncertainty…for the moment.

Erin Washington is currently an instructor in the Painting and Drawing Department at the School of the Art Institute of Chicago, where she received her MFA in 2011. Selected exhibitions include Johalla Projects, MDW fair, Julius Caesar, Murdertown, Columbia College NY, and Zolla Lieberman. More information at www.erinwashington.com.