In 2003 I visited Angkor Wat in Cambodia. The temples and stone sculptures possessed a staggering beauty and scale, but it was the small arrangements of stone rubble at every site that really struck me. I speculated. Perhaps these still-life-like groupings and stone stacks were the work of bored tourists, of wandering minds and wandering hands?  A few years later, I encountered something similar in New Mexico: arrangements of pottery shards on the dry earth of Pueblo archeological sites. Time unsticks in these moments. The ancient slips into the now.  The piles, cairns, and mosaic-like images pulsate with intimacy and evidence a deep urge to play and to delight in touch, shape, form, pattern and texture. 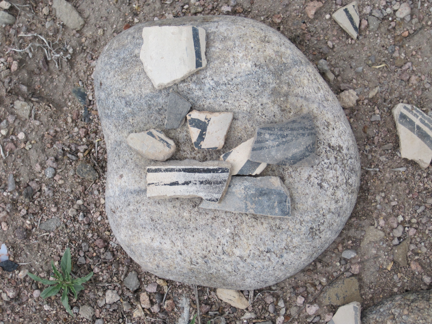 This expression, associated with the Japanese aesthetic Wabi Sabi, has a far reach. I believe it encompasses these ever-so-casual tableaus placed by anonymous hands. The arrangements, easily abandoned, are gestures of impermanence. The stones, shards, and rubble are ever-ready to become something else for someone else, without incident.

Snow covers the ground. Lake Michigan is cluttered with ice. The sun–soaked sand and stones persist. They are here in Clutch. Take a moment and unspool time. Play without purpose.


Leslie Baum is a painter. She studied at the Glasgow School of Art and received her BA from the University of Vermont. Since then she has shown her work nationally and internationally including exhibitions in New York at CRG, in San Francisco at Gregory Lind Gallery, in Chicago at the Tony Wight Gallery, in Rome at Barone Odom Gallery, and in Pyung Teak, South Korea at the Sosabul Art Expo. Her drawings are in the Art Institute of Chicago’s permanent collection and her paintings can be found in numerous private collections. She has been reviewed in Art Forum, Art in America, and the Chicago Tribune, as well as by many other publications. She has been artist in residence at the Vermont Studio Center, and was nominated for the Richard H. Driehaus Award for emerging artists in 2005. Leslie Baum lives and works in Chicago.